I’m not sure physiologically what chemical changes a guy might have when his wife is pregnant (if any), but I found myself slightly emotional while watching a CNN piece on a flight attendant who rapped the spiel about flotation devices, emergency exists and cell phone usage.  Am I ok?

As we were making our way through the grocery store, it finally came to my attention that I was still allowed to have fun drinks and that not all fun drinks are taboo.  Surprisingly, I haven’t missed the alcohol.  Yet.  I usuallly have just one cup of coffee a day but I’ve decided to cut even that in half and top it off with milk, latte-style.  I’ve become reacquainted with orange juice as a breakfast drink and not just a mixer or a marinade ingredient.  I’ve even gotten on board with the horrendous-looking Odwalla Superfood drink.  A few months backs, I cut out my daily Diet Coke but I’ll probably still save it as a treat now and then.  Yet most of the evenings this past week, I resigned myself to just water.  I love water but half the fun of an adult beverage is that it’s something different and usually designates a treat or marks an occasion.  My latest cocktail invention involves a rocks glass filled with ice,  2 key limes, a teaspoon of honey, and topped with club soda.  I’m sure I’m not supposed to eat honey but it mixes better than sugar.  Plus, you can rim the glass with it! 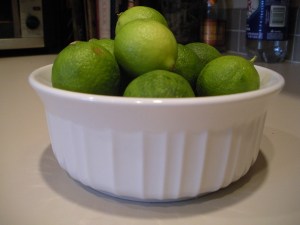 Mike has been incredible this week. I don’t feel silly bringing up any little thing that’s on my mind about all this and his enthusiasm in sharing what he just read is so darn cute. He has the misfortune of being the only one always around so he’s getting the brunt of all my ups and downs but hopefully it’ll get easier once we start telling more people… for both of us!

I checked out what my expected weight gain to be during pregnancy based on my current weight and height. 25 to 35 pounds! That’s at least 25% of my weight right now. Can that be right???

I am absolutely bursting to tell people! So far I have only shared it with Diedre and Amanda. I am heading to Virginia next weekend to scoop up my sister and see Erika, Brett and and their new baby Malina in Richmond and plan to tell them all (and hopefully my mom) the big news in person. Then we plan to call Mike’s parents after I get back. I’ve talked to my mom and sister online since we found out and it’s just killing me to keep my mouth shut! I suppose I could tell people now but it does seem a bit early to volunteer that information but I’ve already told Mike I’m prepared to answer direct questions. Next week would be the six-week mark, if I go by the calendar.

Diedre had loaned us a couple of baby books to get started but Mike and I were pretty anxious to go out and make our own selections. After work on Tuesday we went to Borders and tried to inconspicuously peruse the Parenting section, which seemed to be in a more highly visible area than we would have liked. We both were convinced someone we knew would just come strolling in and bust us. I ended up getting a book subtly called I’m Pregnant!, which had all kinds of cool pictures in color and nice, short engaging sections and intelligently put all the scary stuff in the back of the book. After much deliberation and stack of potentials, Mike selected The Expectant Father for its decent balance of focusing on what was going on with me, logistical considerations, and just the right amount of self-validation without getting snivelly. For good or bad, Mike has taken this book to heart and has either read aloud or referenced many passages since the purchase. Apparently his next task is to create a nutrition calendar that I’ll need to follow and check off every day. I’m hoping the Excel spreadsheet is still empty.

I haven’t really noticed any significant symptoms yet. No nausea or lightheadedness and not particularly hungry. I guess I am running to the bathroom a little more frequently but I’m a regular water drinker so the intervals aren’t so weird but perhaps more the sudden onset of wanting to go. I haven’t been tired enough to bail on my morning workouts but I definitely have less motivation in the afternoons for well, anything really. Except maybe to read my book! I’m also noticing that I feel colder, even in our own house, and need to layer up or cover up with a blanket.

We officially consider ourselves pregnant!

The first positive result happened last Friday, the day that was calculated as being my first day of the next period based on the average over the last few months. I don’t have a regular cycle but it was always with a few days’ range. I hadn’t felt any PMS symptoms prior to this day but I had only recently started having more pronounced PMS symptoms in the last few months, which was about the time we started seriously trying for a baby, so it was anyone’s guess and my biggest hope. That first test was taken about mid-morning and if you bent the stick towards the light a certain way, you could see the faintest of faint lines on the First Response result window (the other darker line being a control line) that would indicate a positive result. It was enough for me! And I knew ANY line was a positive result but it’s tough to say that to an objective observer… say, Mike, for example. I know he handles things easier in small doses so I let him I took a test and that nothing was definitive but there was a strong possibility that our epic run last month was successful. I promised I would wait until the next day to take another test and broke that promise just a few hours later. This time I tried the sample digital test that was included in the box and I guess that faintest of faint line meant there just wasn’t enough there and it came up negative. Not just negative; a worded message: “No”. I still had some hope that it just didn’t have enough to work with and proceeded to happy hour with moderation in mind.

On Saturday, I woke up at 7am, unable to will myself back to sleep. Of course it was on my mind! We had also just completely renovated our kitchen cabinets and the kitchen was still empty and the rest of our house in disarray—pretty much the pea under a stack of mattresses for this princess. I took another test and while it was still faint, it just seemed more there. Not as much light deflection needed! It was still a far cry from a conclusive result to the Objective Observer but things were moving in the right direction! At this point, I was going to operate as though it was a Sure Thing but continue let my Objective Observer take it in small doses. We spent the rest of the day reorganizing the kitchen and cleaning the house, including some nasty tedious business of scrubbing the floor tile grout.

Sunday brought another opportunity to take the test. Of course it was still a faint line but clearly things have progressed! I went to brunch with Diedre to unabashedly engage in baby discussion and then called Amanda to give her a heads up. I knew I wasn’t going to be satisfied until I got Mike totally on board and secretly loved seeing the infamous second line getting darker with each day. I had one test left in the box and planned on buying another one—just to be sure.

I took the last test in the box yesterday and was pleased with how the second line was getting darker. Mike was finally buying in–I could see it in his face and hear it in his voice. Not completely unlike fear and uncertainty. Game on! I still intended to buy another box of pregnancy tests but this time I was going to get the digital kind so I could see the words. So Mike could see the words. I scoped out what to look for in a prenatal vitamin and put that on the shopping list. I jokingly sent Mike an Amazon link to a “dude” book about pregnancy and he actually rejected it since the reviews showed it was not a serious enough book. We have a vague date to shop for our own pregnancy books. We must have crossed the threshold. I am currently reading A Girlfriend’s Guide to Pregnancy and Mike cracked What to Expect When You’re Expecting.

I took the digital test this morning and the glorious words were present: “Pregnant”. Spelled out. Plainly. No lines to compare. 5 positive tests can’t be wrong! I called Boulder Women’s Care, an Ob/Gyn practice two of my friends have used and loved and made an appointment for April 9th. Eeek!

So far, I don’t feel any real symptoms yet. I went to the gym yesterday and today and did take it down a half-notch on the elliptical machine and treadmill but otherwise felt normal. I hear I should just go with this for as long as possible!

I also intend to wear my “hot” jeans every day until I can no longer breathe in them.

Daily results from Friday to Monday

Notify me of new posts!

Look What I Wrote