Maxon is now one year old!  Below is a short video of the past 12 months.  We love you Maxon!

Maxon has had one haircut at home before just to get the hair out of his eyes and ears but we thought it was time for an official all-over cut (I am trying to avoid the bowl haircuts both Mike and I had growing up–no offense to the grandparents). Maxon’s stylist was able to accomplish more in 10 minutes than what had taken me all afternoon ambushing Maxon one snip at a time. While Lollilocks was a very cute, kid-centric place and Maxon had a great experience, for the price we paid, he might have to get the clippers next time. You can have your fancy salon cut when you’re making a name for yourself in elementary school, kid. 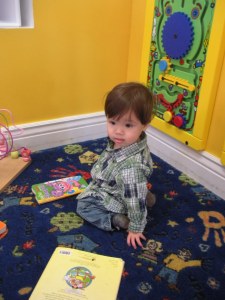 In the waiting area 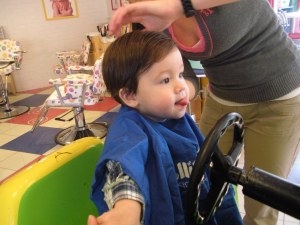 What a good sport!

Indeed, he was a good sport, but he flashed the “all done” sign moments away from being finished and got a little riled up when he couldn’t get down, even though he was in a pretty cool ride. All was good once he was allowed to roam free and start messing with all the drawers nearby.

Now that have we conquered the scary first steps and Maxon has become increasingly willing to mimic, our days have gotten a lot more entertaining.  Well, our nights too, as we routinely get up before the sun does.  I’m not even sure how he got turned on to it but he knows what going “night-night” means.  He’ll just randomly put his head down on a purloined blanket/article of clothing/corner of a rug) and say “nigh-nigh”.  Not that he is actually inclined to “nigh-nigh” until sunrise, but I have gotten more successful in initiating naptime after one of these unsolicited displays.

As for walking, he has been insisting on walking everywhere at home.  He’s much more skillful at traversing the entire room, although he would much rather do it while holding one of Mommy’s or Daddy’s fingers.  He’s still pretty wobbly and Mike and I are in constant surveillance of the Lego minefield in our living room.  We have been summoned a number of times by little fingers grasping one of our own and an insistence to vacate the immediate area in favor of anywhere else.  The times that I have been unwilling to get off my rump to go across the room resulted in Maxon just going in circles around me.  Of course, if we’re out at the store or the gym, all he wants to do is crawl across the floor or parking lot.

I discovered early on that Maxon comes equipped with an on/off button that he is usually unable to execute on his own.  Yet, he is obsessed with any other object that has an on/off button.  He loves getting his hands on a phone but it must be a functional one.  No dial tone, no lights, no dice.  And then he must turn the phone on (preferably on speaker) before holding it to his ear, walking across the room, or throwing it directly on the ground.  When he makes his rounds in the living room, he needs to turn on (or off) the ceiling fan and then the Wii (sometimes still carrying a phone).  His sound machine also has a night-light which you can activate by pressing on the top.  Apparently I have been using my feet to turn it on and off more often than not (it’s on the ground–who wants to bend?) so Maxon does his best to do the same.

We’ve also been working on our animal sounds with some success.  He doesn’t always remember the sound a doggy/kitty/lion/monkey makes, but he does a pretty good impression once we remind him.  But perhaps the best impression he does is of a monkey and its diet of bananas.  Seriously, this kid can throw down an adult-sized banana.

I’m not sure exactly how to categorize this but it’s worth sharing.  During most diaper changes after the pants have been removed but before I get the old diaper off, Maxon will grab the front of his soggy diaper with both hands and grunt “ah-ah-ah-ah-ah”.  I’m fairly certain this has not been purposely taught but I do blame the effects of the Y-chromosome.

At the Munchkin Masquerade on Pearl Street

Someone’s head was too big to snap the hat together under his chin. It’s a wonder it stayed on as long as it did!

At the crafts table at the school party

Listening to the Music Man

Grabbing lunch… and my hat

Our backup costume in case he did not tolerate the monkey suit. This one is for the Kimmels!

Notify me of new posts!

Look What I Wrote